There are many casino games available out there, and while most of the games are games that we did not play as children, sometimes an old favorite creeps in, such as the Rock Paper Scissors arcade games that can be found at the trusted and quality Slots Heaven casino. Rock Paper Scissors is the game that was used by many as children in order to resolve certain disputes, or simply to make decisions about things. Players would attempt to predict what their opponent was going to play in order to beat them with a hand symbol that would do so. While the game that is played as casino arcade games is a little different because this time it comes with wagering, the hand symbols remain the same. 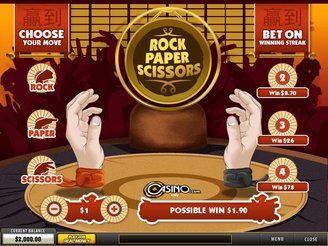 When playing the Rock Paper Scissors game, a clenched fist represents the rock. Two fingers in the shape of a pair of scissors is the scissors symbol, and the paper symbol is shown by a flat hand with the palm of the hand facing down. The rock beats the scissors because it can smash into the scissors, but the paper can beat the rock because it can cover it. The scissors, while it loses to the rock, beats the paper because it can cut paper. Playing this game at Slots Heaven is a fun way to take a trip down memory lane and enjoy these Rock Paper Scissors games as casino games seeing as most adults do not play this game unless they are playing it with children.

Playing the Rock Paper Scissors game, as with other arcade games at Slots Heaven is easy. Players simply need to choose a wagering level and then how many times they wish to play the game. When playing just one round, the winnings are paid out at 1.9x the wager that was placed. Those players who choose to play two games in a row will be paid out at 8.7x their wager if they win both games. Those who wish to try and win three games in a row will win 26x their original wager, and those who would like to try and win four times in a row will win a whopping 78x their original wager that was placed. When playing multiple games, payouts are only made when the players wins all of the games. It is possible to play in winning streak mode and then stop it by clicking on Quit Streak Bet. The Rock Paper Scissors game is simply one of the best casino games to choose if you want to step back in time for a while.