There are a large number of casino games available at these slots, and for those who are looking for arcade games with a great theme, look no further than the Medusa’s Gaze game. This game is based on the Greek mythological figure, Medusa. Medusa, who had snakes instead of hair, is well known for tuning people to stone with a single momentary glance. Those who were careful not to make eye contact with Medusa could be saved from this terrible fate. 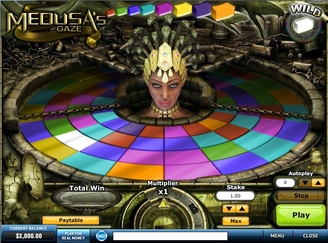 In the Medusa’s Gaze arcade games, players will see Medusa’s head surrounded by a circle of different colors. The aim of the game is to get a winning combination, which means that players will need o try and line up three or more tiles of the same color. The tiles can be lined up either on one drum, or on one row. There are four drums found in this game and 12 lines. There are nine colors that players can try to match. Players need to first place their wagers on the game. After having placed their bets, the player will then click on the Play button, and the game will begin. The wagers that can be placed cover a wide range of choices, making these casino games accessible to all. The drums are then launched and when there is a winning combination, payouts are made according the listed pay table, and the tiles that formed the winning combination fall in and new colored tiles replace them.

The Medusa’s Gaze arcade games are essentially similar to slots. When a white tile appears, the tile is used as a wild symbol, in the same way that wilds are used in analog slots games. The white tiles can be used to replace any other tiles. When replacing other tiles, they can help to form more winning combinations, just as wilds would in slots casino games. When winning combinations are made, they are given a multiplier which goes up by one for each round as more winning combinations are made one after the other. This Slost Heaven game is an easy game to play, and players can simply spin, watch the multicolored wheels do their thing, and win when the time is right. This mythological themed game was created by the Playtech casino software provider and is available for play at the popular Slots Heaven casino.