When looking for exciting casino games, don’t pass by the Megaball game that can be found on the Slots Heaven arcade games list. This game is fun and can provide hours of fun for players. Megaball is a progressive jackpot game that gives players the chance to make guesses about the numbers and colors of the balls that are randomly chosen. The game comes with some great sound effects and is also aesthetically pleasing to play. 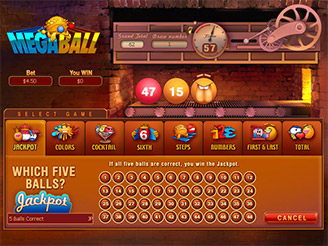 The Megaball arcade games give players the option to make a number of different predictions based on the six colored balls and the numbers that can be found on the balls, ranging between the numbers one to 48. Players can try to predict the colors of the balls that will be dropped. The balls are available in just three colors, red, yellow, and blue. Players can try to predict how many balls of each color will be dropped, or if they think a blend of the three colors will be dropped. When selecting multiple colors, this is known as the Cocktail option. Online slots players can also choose to try and predict the number that will appear on the sixth ball that is dropped. While this is somewhat difficult to do, if the player picks the correct number for the sixth ball out of all 48 numbers, their winnings are multiplied by 45x.

Other Betting Choices in Megaball

Megaball allows players to make a number of betting choices, which means that playing casino games such as this one keeps players on the ball and having fun. Apart from the prediction choices above, players have a number of other choices available to them. Players can try and predict the order of the balls that will fall according to their values either in ascending or descending order. Another winning prediction is when players can predict the number value of up to four out of the six balls. Another exciting bet that players like to predict is the First and Last prediction. For the First and Last prediction, the player guesses at whether the first ball will be a bigger number than the last ball selected, or vice versa where the first ball will be a smaller number than the last of the six balls. For another exiting prediction, Slots Heaven players can try to predict the total value of the numbers that are seen on the balls that have been selected in these arcade games.