The Rubik’s cube was a popular pastime and a game of the childhood of many. The casino games software company, Playtech, has designed a large number of popular arcade games, and while a real life Rubik’s cube cannot be replaced, the Rubik’s Riches game found at Slots Heaven casino is definitely one that is worth playing. The game is played with only three sides of the Rubik’s cube being visible. When play begins, the cube is shuffled around and players win when at least one line of the cube is complete. The more lines that are completed, the greater the payouts will be. 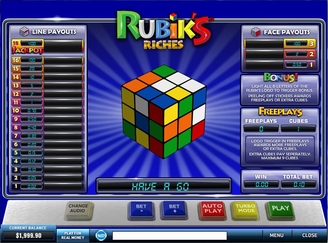 After choosing a stake, or a wagering level, for Rubik’s Riches, players can begin play. To begin play when playing this and other casino games at Slots Heaven, simply click on the Play button. After clicking on the Play button, the Rubik’s cube will begin to rotate in a random manner. Payouts are made for both lines and for covering an entire side all in the same colors. The colors that are seen in the game are White, Green, Red, Blue, Orange, and Yellow. There is no preference in the colors and all winnings, no matter which colors have created the winning combination, are paid out the same.

Players love bonus games when playing their favorite casino games, and only some arcade games will come with special bonus games. When playing the Rubik’s Riches game, it is possible to get a great bonus game. The Rubik’s icon that is at the top of the screen could be illuminated while game play is taking place. When all of the lights have been highlighted, the player then gets to play the FreePlays bonus. The FreePlays are automatically played out and winnings will be paid out according to the stake that had been placed on the game in which the FreePlays were awarded. It is also possible for FreePlays to be triggered during a FreePlays round. The bonus game that is available gives players the chance to peel off a square on the Rubik’s cube. Whatever prize is revealed is given to the player. The prizes available are either free spins, or free plays, or players could be given additional cubes to play with. Choosing Rubik’s Riches at these online slots is one of the popular arcade games choices.