Queen of the Pyramids Slots

The secret of the sphinx has got nothing on the Queen of the Pyramids! Even if you don’t know anything about this time period, you are going to enjoy the fun flavour that this online slots machine has to offer. Cleopatra is said to be one of the most beautiful women history has ever seen, and she was also one of the most frightening! Well, if you’ve seen the faces depicted on these reels, you might believe both to be true. Either way, this royal figure is out to make you some money, so let’s start gambling now! 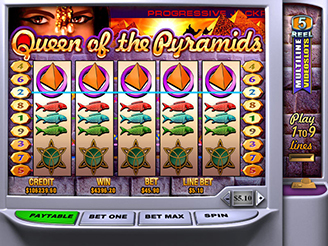 The Queen of the Pyramids has a pretty straightforward set up. It has nine paylines that you can turn on and off at your will. There are five reels with three rows each, making fifteen squares appear on the screen at every spin. Your job is to line up the various symbols in order to create winning sets. A set is considered a win when you get the right amount of that specific symbol at one time on the screen. The right amount varies from two to three depending on the image. Of course, the more of one symbol you get at once, the higher the value of the win. If this all sounds a bit confusing, then let’s slow down a bit, and take you through the pay table for a little clarification.

Reading The Queen of the Pyramids Slots Pay Chart

As the chart states, there are various symbols ranging in value from the lowest, a green bird hieroglyphic, to the most lucrative of them all, the Queen of the Pyramids herself. The X’s tell you how many you need to get to receive the prize amount. The numbers on the grid represent how much you should multiply your line bet by in order to come up with your grand total. It’s simple math, but the computer will do it for you anyway, so no worries.

There are also special symbols that don’t work like the usual ones do. A unicorn symbol is the key to a unique bonus round. Three of these icons will start this feature, so cross your fingers for him to show up! The scorpion wins freebies from Online Slots Casino Slots Heaven when you play your cards right too.

Be sure to stop by our lobby, and check out some of the other exciting Slots Heaven online casino games that we feature. Whether you are looking for a cool, calm and collected variety like Panther Moon or you want some sizzling action like Benchwarmer Football Girls, we’ve got the flavour to keep you going all night, so let’s get busy now!