If you are looking for casino games that offer you the pot of gold at the end of the rainbow, then the scratch cards you will want to try are the Irish Luck Scratch card games at Slots Heaven. The Irish are known to drink and dance, and simply know how to have some fun, which players will find right in front of their eyes when playing this instant win game. While there are no guarantees, players get to take the chance of picking the correct pot, the one that will have the gold inside it. 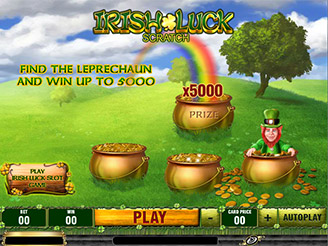 Pick a Pot in the Irish Luck Scratch

The Irish Luck Scratch game is a little different to many of the other scratch cards in that there are not nine squares that need to be revealed. Rather, players need to choose one of three pots of gold. When the player has picked the winning pot of gold, a leprechaun will appear in the pot of gold, showing that the player has picked the correct pot and has won the prize. While there are other casino games that may keep players busy for longer, this fun and cheerful Irish Luck Scratch game at Slots Heaven is one that players keep coming back to.

To being with, decide how much you want to bet on each round of the game. It is possible to change the betting level for each game before you click on the Play button. After deciding how much to wager, click on the Play button. After that, the player should choose one of the three pots of gold, which means that there is a one in three chance of winning, and then hope that the leprechaun will pop up to let you know you have won. It is also possible to play this scratch game in Auto Play where the casino’s random number generator software will pick the pots of gold and will play the game for you while you sit back and relax. There are so many casino games that are played in a similar way that is refreshing that Playtech scratch cards come in a number of different formats, such as the Irish Luck Scratch card game. In order to play the Irish Luck Scratch game. Play the Irish Luck Scratch card game now at Slots Heaven and see if you have the luck of the Irish!