The Kong Scratch game is one of the exciting casino games that are found at these online slots. Players will see the main characters from the 2005 movie, Kong, which was modeled after the original epic movie from the 1930s. When scratching, players will enjoy uncovering familiar faces. The graphics that are used in these scratch cards are taken from the movie, and are simply incredible. The Peter Jackson movie that was released in 2005 has some great symbols with King Kong, Jack Driscoll, Ann Darrow, and Carl Denham. Not only will this game remind players of the storyline of the movie, it also offers lucrative wins! 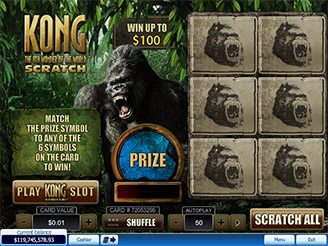 How to Play the Kong Scratch Game

When playing the Kong Scratch game, players will find that even though the game is exciting and fun, it is really very simple to play. While you might love some of the characters that are found on the symbols, and hate some of the others, you will definitely love these scratch cards. In order to begin play, simply choose a wagering level. After you have picked the amount that you would like to wager per scratch card, you then press on the Play button. The aim of this game is to uncover a symbol that matches the one that is found in the circle on the left of the panels. Players can scratch each panel manually, or can choose the scratch all choice and let all be revealed at once. Each winning symbol comes with its own multiplier, making this one of the great casino games, which offers good payouts. It is also possible to shuffle a choice of three cards before starting play, which means that players at Slots Heaven get a choice of which scratch cards they would like to play.

Players who play this Kong Scratch game will find that along with the great theme, they will get to search for hidden treasure in the jungle as they scratch away on the panels. For those who manage to choose the correct panels to scratch, there are some big wins available. Along with playing these great Kong scratch cards, players can also enjoy the video slot game with the same name and theme that is also found at Slots Heaven. No matter whether you win or lose, playing both these casino games is a lot of fun, and when you have fun, have have already won!