When we think of Rocky, we think of Sylvester Stallone. When playing the boxing themed Rocky Scratch game, players will not only remember the Rocky movies, but will get the chance to watch some movie clips that are played when players choose their scratch cards. There are a large number of fun and exciting casino games at these online slots, although it is likely that the Rocky Scratch game will be one of the more popular scratch games amongst players. We all enjoy seeing Rocky beating his opponents, and we hope that just like Rocky, we will get the chance to win. 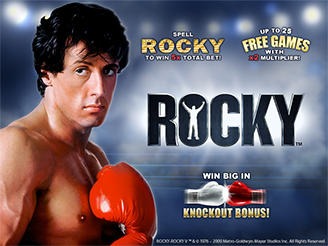 About the Rocky Scratch Card

Playing scratch cards at Slots Heaven is a great way to enjoy your casino games time. When playing many other games, players might have to learn the rules or pay a lot of attention to make sure that they are playing the right card, or choosing the right wagers. When playing the Rocky Scratch, as with other scratch games, players get to sit back and relax and stand the chance to win some cash. Playing is easy, although these scratch cards certainly have more to them than many of the other scratch games. Players win this game when they have beaten one of the well known opponents of Rocky. Player get to choose which opponent they would like to be up against, from the choice of Ivan Drago, Apollo Creed, and Clubber Lang. When players win, they will see Rocky beating the opponent, but when they lose, they will have to watch Rocky being knocked down by his opponent.

When playing the Rocky Scratch game, players simply need to follow the few easy scratch cards steps to get the game going and stand the chance to win. Players first place their wager, then press the Play button, and then the fun beings. The scratch card casino games have three panels. Each time a player scratches a panel, a movie clip will be played. The three panels hide the three opponents that Rocky fights. Players need to try and pick their chosen opponent in order to win. Whether the player picks the winning panel or not, it is still possible to scratch the other panels and see which opponent was hidden under each panel. When scratching the other panels, players get to watch the Rocky movie clips too. Playing the Rocky Scratch at Slots Heaven is a definite must do!