The Top Trumps Celebs Scratch game is a great choice from the casino games list that is found at Slots Heaven online slots.. Players will enjoy seeing some of the most popular celebrities on their scratch cards screen. The celebrities are both musicians and actors, and most players will recognize almost all, if not all, of the celebrity symbols. Included in the list of celebrities, some of the female celebs that could be gracing your screen are Paris Hilton, Britney Spears, Mariah Carey, Christina Aguilera, and Madonna. Amongst the male celebs are other greats, such as Brad Pitt, Sean Connery, George Clooney, and Nicholas Cage. It certainly can be great fun when your favorite celebrities help you to win some instant cash. 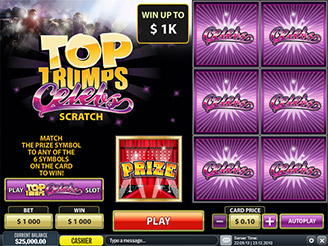 The Top Trumps series of scratch cards do not expect players to find three of the same celebrities, because let’s be honest, each is unique, so we would not expect to see three of the same celebrity on the screen at the same time. There are six panels available on the right hand side of the game, and just to the left of that is a single square. This square will show the picture of a randomly selected celebrity, and players will need to match the winning prize symbol on the left with one of the symbols on the scratch card in order to win the game. Some games can be somewhat complicated to play, but these celebrity casino games that are found at Slots Heaven are easy, fun, and exciting!

As with other scratch cards, playing the Top Trumps Celebs Scratch is easy to do. Players simply need to select the amount that they would like to wager on each round and then begin playing the game. In order to play the game, players who have already made their betting decisions can simply click on the Play button. After pressing Play, players can scratch the panels off, either one at a time, or by using the scratch all button and clearing all the panels at once. There is an Auto Play feature available at Slots Heaven’s Top Trumps Celebs Scratch game. This feature makes the game particularly easy to play for those who wish to play a number of these scratch casino games in a row. So, sit back and relax as you play Top Trumps Celebs Scratch at Slots Heaven now!