The 25 Line Aces & Faces variation of the Aces & Faces video poker game is a very exciting game variation.Online Slots often come with special features, but this great game is certainly one to be played. The game is very popular at Slots Heaven with both new and veteran casino players. While the basic game is played in the same way as the original Aces & Faces game, players are given the chance to win hands from 25 different hands that are dealt. As with the 4 line version of this online video poker game, players will first be dealt their initial hand of five cards. The player then chooses which card or cards to hold, and discards the rest. The cards that are held will appear on each of the 25 poker card hands, and each line will have the hand completed from a fresh deck of 52 cards that contains no wild cards or jokers. The winning combinations are then paid out according to the pay table. 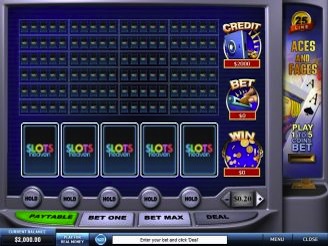 The highest payout in 25 Line Aces & Faces goes to the Royal Flush hand with a 250 to 1 payout and a payout of 4,000 if the max bet was wagered. Next comes the hands that show Four Aces, at 160 to 1, and then the Four of a Kinds made up with face cards, with Jacks, Queens, or Kings bringing a payout of 80 to 1. Four 2s through 4 10s give a payout of 50 to 1, as does the Straight Flush. The Full House pays out at 9 to 1, and the Flush pays out at 5 to 1. Three of a Kind is paid out at 3 to 1, and both Two Pairs and a single pair that is made up of Jacks or Better are both paid out with even money. Players should note that the pay table for this variation of the 25 Line Aces & Faces game is somewhat different to the other two versions of the game that are offered at Slots Heaven.

As with other casino games online, in order to play this video poker game, players need to make a choice of whether they wish to bet one or more coins, or the max bet. Playing the max bet can offer larger payouts when winning combinations are hit. In this game, the 25 Line Aces & Faces game, players will find that they stand a greater chance of hitting winning combinations. In order to begin the game, players should choose a betting level and then click on the Deal button. After that, the player needs to select the cards to keep and then press Deal again, and the rest is done by the Slots Heaven casino software.