4 Line Aces & Faces is a great variation for those who like the regular Aces & Faces video poker game. This variation is definitely one of the online casino games that players might well enjoy more than the original version of the game. Essentially, players end up with four chances of making winning combinations rather than just one. The game is played with the standard 52 card deck for each of the four lines. There are no wild cars in any of the decks. Players will make their initial choice of which cards they wish to hold, and will then be dealt four rows of five cards each, and can look at each row to find a winning combination. Games variations such as 4 Line Aces & Faces certainly make playing at Slots Heaven casino a more exciting experience. 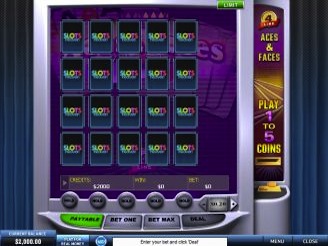 The payout table for the 4 Line Aces & Faces game has the Royal Flush as the top video poker hand. Players win 500 to 1 for a Royal Flush hand and a whopping 4,000 to 1 when winning this hand and having played the max bet. Playing the max bet in Online Slots Casino games almost always improves the payouts available. Four Aces come with a payout of 80 to 1, and a Straight Flush has a 50 to 1 payout. Four Jacks, Four Queens, or a hand of Four Kings are also special combinations in this game variation, and pay out 40 to 1. Other Four of a Kind combinations, from 2s through 10s pay out 25 to 1. A Full House is paid out at 8 to 1, and a Flush is paid out at 5 to 1. Players who receive a Straight get 4 to 1, and a Three of a Kind get 3 to 1. Two Pairs get 2 to 1, and a Jacks or Better single pair pays 1 to 1.

How to Play 4 Line Aces & Faces

While the 4 Line Aces & Faces game is played in a similar way to the regular Aces & Faces online video poker game, the chances of winning are increase fourfold. Players are dealt the initial five cards from which they need to choose which cards to hold, and which to discard. After the choice has been made, the cards that are held are reproduced from each of the four lines. Each line is dealt cards to replace the discarded cards from a new deck of cards. Players at Slots Heaven are then paid out for their winning combinations from the four rows.