Aces & Faces has become one of the well known and somewhat classic video poker games. The game even has a number of variations on the basic Aces & Faces theme. Slots Heaven has two other version of this game. Players who have played any versions of poker online casino games will find that this game is easy to play. As the name of the game suggests, players will find that holding a hand that contains Four Aces is a good hand, and it is rated on a higher payout level than a regular Four of a Kind. Other Four of a Kinds that come with a higher payout rate include those that are made up of face cards, such as four Jacks, four Queens, or four Kings. The lowest rated hand in this game is Jacks or Better. 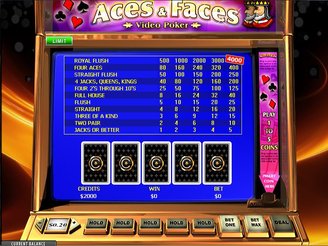 The Royal Flush is the highest scoring hand in the Aces & Faces game. Players who get a Royal Flush will receive a payout of 500 to 1, and a maximum payout of 4,000 to 1 when wagering the maximum bet. Four Aces is the next highest hand in this online video poker game, and it comes with a payout of 80 to 1. The Straight Flush is paid out at 50 to 1. Next highest hand in this Slots Heaven game is the Four Jacks, Four Queens, or Four Kings at 40 to 1. Other Four of a Kind hands from 2s through to 10s receive a payout of 25 to 1. Following these special and higher valued hands comes the Full House that is paid out at 8 to 1, and the Flush at 5 to 1. The Straight pays 4 to 1, and the Three of a Kind pays 3 to 1. Two pairs pay 2 to 1, and 1 Pair of Jacks or Better pays out even money.

How to Play Aces & Faces

As one of the popular Online Slots choices, Aces & Faces is fun and easy to play. Players simply need to select a coin size that they wish to play with, place their bet, and click on the Deal button. Players will see five cards on the screen, and will then select which of these cards they would like to discard. It is best to first look at the pay table in order to make a good decision as to which hands would be more lucrative for this video poker game version.