Arcade games come in many forms, and one of the popular casino games that can be found is a roulette style game. The Spin A Win game at Slots Heaven looks like a wheel of fortune style game, yet it is far closer to a version of the game of roulette. The game will keep players entertained and sitting on the edge of their seats as it spins around and the player waits to see if they have won or not. The aim of the game is to predict where the spinning wheel will stop, and as in roulette casino games, players do not only have to choose one single number, but can also choose groups of numbers. 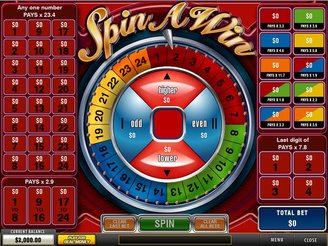 Betting on the Spin A Win Game

Spin A Win is not only a game that is played online but can also be found in the arcade games areas of brick and mortar casinos. While it is important to spin the wheel and see what number is the ‘winning’ number, the main part of this game is when the player chooses which bets to place. There are 24 numbers that are found on the Spin A Win wheel, and players can choose to place bets on individual numbers or they can bet on groups of numbers. It is possible to choose a range of numbers such as numbers 1 to 8, numbers 9 to 16, or numbers 17 to 24. The wheel is also divided into colors that form different groups to the number groups. Online slots players can choose to place their bets on a specific color winning if they wish to do so. It is possible to place a bet either on a single color, or on more than one color as per the table shown on the Spin A Win’s casino game’s screen. It is also possible to place a wager on the last digit of the numbers, an odd or even bet, and it is possible to place a wager on whether the number will be higher or lower than a given number.

While there are many great arcade games to play, there are some that seem to stand out above the rest of the casino games. Spin A Win is one of these games. The game is a somewhat easier form of roulette and it is fun and brightly colored and particularly popular amongst land based players and with those who play in the Slots Heaven casino.