With five reels and 25 paylines, Arctic Treasure takes you into a mythical ice land with a hidden treasure waiting to be found. The fantastic frozen landscape will guide you through bonus rounds on the way to big rewards. 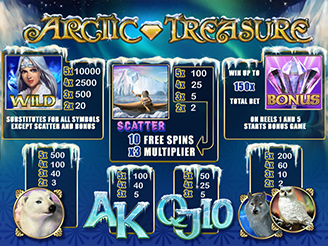 As you play Arctic Treasure online slots, pay attention to the icy symbols as the reels stop and then land on the screen. Notice the majestic polar bear, the regal wolf, and the wise owl as well as the Ice Princess and the Eskimo in the kayak. Each of the symbols has a special purpose, value and meaning.

Reels one and five will also hold special meaning for you if the pink crystals spontaneously appear on them. When the pink crystals appear you will have an opportunity to play the Arctic Bonus round. In this round you are given a chance to win up to 150 times your original bet. You will be taken into the Crystal Room where you will need to choose three crystals and if you are lucky your crystals will contain the prize to the big jackpot you were hoping for.

Like many of the Slots Heaven online casino games, Arctic Treasure also has a gamble feature. The gamble feature is similar to the high card draw feature found in video poker and might add an unplanned surprise to your bankroll. You can choose this option if you would like a chance to double your winnings. When playing the gamble feature five cards appear on the screen. You simply need to pick one, and if your chosen card is higher than the one chosen by the computer, you win.

Online Slots Casino Slots Heaven brings you this frozen adventure packed with compelling graphics and delightful animation. Fun, well planned bonuses abound in this world of ice so the best time to play is now, because the Ice Princesses is waiting to take you to the treasure.