Everybody’s Jackpot is not your ordinary online slots machine. In fact, it is about as out of the ordinary as you can get without leaving the whole category behind you! Take a look. 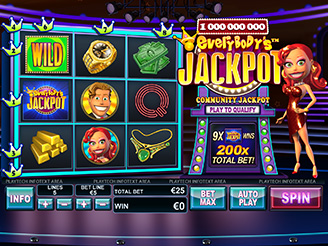 Like we said, Everybody’s Jackpot is about as atypical as you can get. For one thing, there are multiple paylines, but you don’t get to choose how many or which to open. In most other versions, you’ll either be told that there is only one single payline or that there are several paylines, fifteen, twenty, thirty for example, and you get to decide which ones you want to activate during the round. In this case, though, there are eight paylines that are always active, regardless of your preference! The screen is made up of nine reels, and the lovely female assistant is standing to the right of the board, tallying your wins.

Unlike many of our other Slots Heaven online casino games, Everybody’s Jackpot has a wild card with a caveat. It only shows up during the bonus feature, so don’t keep looking for it during the regular rounds. It won’t show up! The scatter symbol is doing a lot of work on these reels. That’s because three of them will reward the player with twelve free spins and a wild symbol, and, believe it or not, that’s just the beginning. During the freebies, you are able to activate more complimentary rounds just by getting the same scatter combination we just mentioned. So the effect can go on uninterrupted indefinitely! How’s that for a winning bonanza?!

Now for the grand finale! Everybody’s Jackpot has a climbing kitty that is donated to through your bets and the best of each player participating in this version at Online Slots Casino Slots Heaven across the globe. So how does it work exactly? We’ll tell you how. The kitty grows with each bet that is placed. Eventually, some lucky player is going to trigger that load, and that’s when the fireworks go off! The lucky player gets seventy percent of the payload. The other thirty, though, goes to the rest of the players who have been enjoying this option in the past twenty-four hours! Sharing is caring, and that’s what this version is all about. There is a qualifying amount that you need to reach in order to take part in the group collection, and the counter to the side of the playing screen will tell you where you are holding in that race. We told you it’s untraditional! If you are up for something new and exciting, check out this version today!