Frankie Dettori is an Italian-born jockey who is based in the United Kingdom and has had a massive impact on the UK horse racing industry. He has ridden horses like Raven’s Pass, Shalaa, Blue Bunting, Wilko, and Lady Aurelia and has won thousands of races, more than any other jockey in Great Britain.

Whether you’re a horse racing fan or not, there’s a good chance you will have heard of Frankie Dettori. He has won major races all over the world, including the United States, and has etched his name on the annals of sporting history as a result. Frankie Dettori’s Magic Seven was created in his honour and is a perfect homage to a true great of the sport. 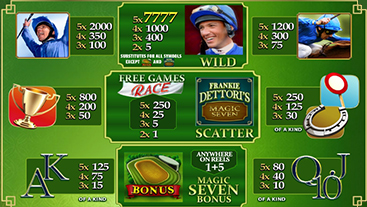 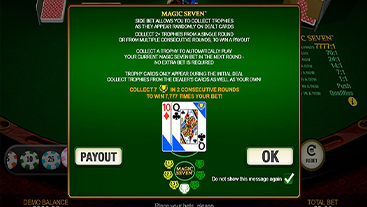 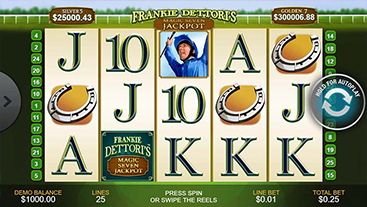 Frankie Dettori’s Magic Seven slot game takes place against the backdrop of a horseracing ground and features symbols of the famous jockey himself, as well as a Trophy, of which he has won many during his illustrious career. There are 25 paylines going from left to right and you can unlock a few top features, as described below.

You can play all Slots Heaven games for real money, but if you want to try before you buy, simply spin in demo mode. You will get a bundle of free credits and you can use these to spin the reels, collect the features, and do everything else that a real money player can do (with the exception of winning actual money, of course!).

Join Frankie as he races for the finishing line and tries to get a share of those sizeable payouts. Every time you take a real money spin, you have a chance of winning big, so fund your account today and see where your spins take you!

The highest payout for a single symbol win is fixed at 7777x and is supplied by the Frankie Dettori Wild. The “7” that features here, in the title, and throughout the game alludes to what has been called the “Magic Seven” or “Magnificent Seven”, a day when the jockey won all seven races on a single card.

It was considered a near-impossible feat before he achieved it back in 1996 and it remains one of the most memorable events in horse racing history.

Keep your eyes peeled for the Track Bonus Symbol and the Game Logo Scatter, as these trigger the game’s two bonus features.

The free spins feature tasks you with choosing a horse and watching the race. If it wins the race, you’ll get 35 free games; if it finishes second or third, you’ll get 15 or 10. Additional wild symbols and scatter symbols are added to the reels during this feature, but the feature cannot be retriggered.

The Magic Seven bonus takes place on a racetrack. The goal is to click the items on the screen to reveal prizes. You’ll see snapshots of Frankie achieving his famous “Magic Seven”. If you reveal a “Collect” symbol, the winnings will be paid and the feature will end.

It has been a long time since Frankie Dettori achieved one of the greatest feats in the history of horse racing, but it still lives long in the memory and you can relive every moment on your mobile device with Frankie Dettori’s Magic Seven slot game.

The video snapshots, just like the game itself, really come to life on smaller HD screens, and once you add touchscreen capability to the mix, it creates a tactile and engaging experience on the whole.

And these are just a couple of the many sports-themed slot games available at Slots Heaven right now. Join Slots Heaven , collect your Welcome Package, make a deposit, and start spinning along with Frankie!