Even if you weren’t a fan of the 2011 Green Lantern movie, you’ll love the online slots adaptation at Slots Heaven UK. The 5-reel online casino game has an amazing 243 different ways to win, a great collapsing feature and is a part of the DC Super Heroes progressive jackpot. But perhaps, the most exciting feature of the game is the special powers that are contained in the Green Lantern Power Bar. 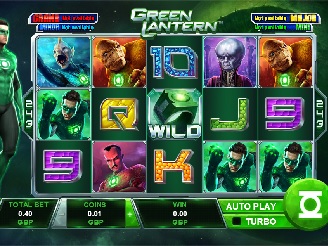 The game’s storyline is similar to that of the movie and comic book scripts. Hal Jordan, played by Ryan Reynolds, was a test pilot who became the first person to join the Green Lantern Corps. He was given a powerful ring that is the source of his powers. Parallax is a supervillain who is out to destroy the balance of power and take the ring for himself. All of the main characters make appearances, both as symbols and in short videos throughout the game, and the ring is featured as the Wild symbol.

The collapsing feature is really what makes the Green Lantern such a thrilling game. After every winning spin, the winning symbols are removed from the reels and the remaining reels drop down and new symbols fall into place of the old ones. This allows for multiple wins with every spin, and the collapsing doesn’t just happen once per spin. As long as the new symbols create a win, they will continue to collapse.

In addition to creating more winning opportunities, the collapsing wins are also the key to entering into one of the three missions. For every consecutive collapse, the Green Lantern Power Bar, which is located within the “spin” button starts to fill up. It takes at least 4 straight collapses to randomly trigger one of the missions. The more consecutive collapses you get, the higher your mission charge will be, which equals more chances to win.

However, be warned that a spin that doesn’t result with a collapsing win will reset the Green Lantern Power Bar back to zero.

Each of the three missions have their own unique features.

In the Training Centre Mission, you get 10 free games and some extra wilds. The higher your charge, the more wilds are added to the reels.

The Green Lantern is part of the DC Super Heroes Progressive Jackpot. With any spin you can randomly be entered into 1 of 4 jackpots and a guaranteed win. The size of the jackpot is determined by which of the jackpots, mini, minor, major or grand.

For your chance to win real money, register an account at Slots Heaven UK and start playing today.