Play Age of the Gods: Prince of Olympus Slot Game

Zeus was the god of gods, the king of Olympus. He is the man on which many ancient Greek myths and legends were based. He was also the father of Heracles, better known by his Latin name Hercules.

A favorite among video game developers, animators, and film companies, Hercules was a legendary Greek hero whose stories were told throughout the Hellenic world. Hercules is also the eponymous hero in the Age of the Gods: Prince of Olympus slot, a real money slot machine that you can find here at Slotsheaven.com NZ. 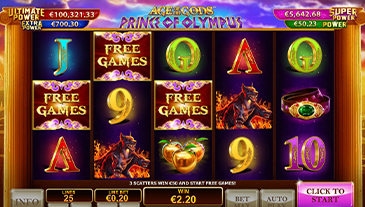 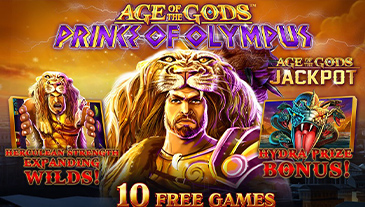 Prince of Olympus is a refined slot with a luxurious purple backdrop and gold-trimmed icons. The symbols include gilded playing card symbols, a Spiked Club, and Orthrus, a two-headed dog that was slain by Hercules (not to be confused with Cerberus, who had more heads and was Orthrus’s brother).

There is also a set of golden apples, which were part of Hercules’ 11th labor, one in which he was tasked with taking Zeus’s golden apples to Eurystheus.

As you can see, it’s a slot that’s filled with mythological easter eggs and one that fans of Greek myth and the Hercules story will know. But you don’t have to know anything about Greek myths to enjoy this slot, as it’s packed with features as well.

If you want to take a few spins of Prince of Olympus without making any real money bets, just try your hand at Practice Mode. It’s offered to all Slotsheaven.com NZ members, so if you don’t have an account, sign up now!

With Practice Mode, you can test all the features and enjoy all the symbols without wagering a single cent.

To be in with a chance of winning the progressive jackpots, you must play for real money. All players have a chance of scooping these prizes regardless of the stake, so keep this in mind as you play and remember to set a reasonable stake and gamble responsibly.

Prince of Olympus is part of the epic Playtech Age of the Gods jackpot system. There are four jackpots in total, each bigger than the last, and they can all be won with a single spin.

To trigger the jackpot, you first need to activate the jackpot game, which launches at random. From there, one of the four progressive prizes could be yours.

The Herculean Strength feature can be triggered during the base game and the free spins feature. The free spins can also be retriggered by revealing more Scatter symbols.

Explore the 12 labors of Hercules on your mobile device! Like all slot games in the Age of the Gods series, Prince of Olympus is fully supported on mobile, and smaller, high-definition screens really make this game shine.

The luxury backdrop looks even more luxurious; the golden buttons shine even brighter, and you can enjoy all the same great benefits and possibilities that you’ll find on desktop.

Age of the Gods: Prince of Olympus is an adventurous slot that takes players on a journey through Hercules’s heroic life, including the famous 12 labors for which he is best known. If you’re looking for a legendary slot with big bonuses and lots of style, this top Playtech title could have what you need.

Play this game today at Slotsheaven.com NZ. If you’re new around here, check out our Welcome Package, peruse the Terms and Conditions, and when you make your first qualifying deposit, there could be bonus credits and/or free spins waiting for you.