Rocky is one of the greatest sports movies of all time. It defined a decade, earned Sylvester Stallone legendary status, and inspired countless films, TV shows, and video games. Without Rocky, the world would be decidedly poorer.

There were 6 films in the Rocky franchise, the last of which, Rocky Balboa, was released in 2006. It also led to the Creed spinoff. The Rocky slot game, which takes its cue from its titular hero, seems to focus on the first four films in the series when Rocky faced off against some of his most memorable opponents. 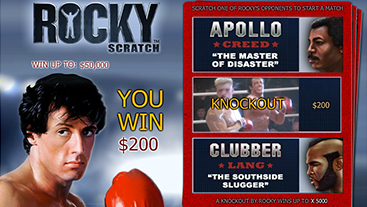 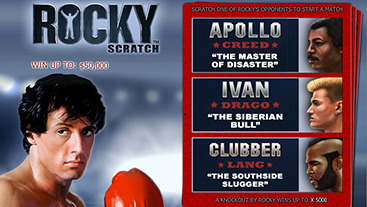 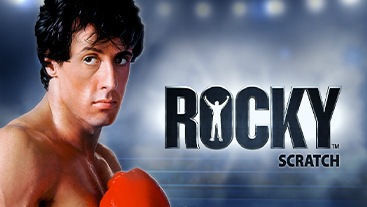 Along with the Pride of Philadelphia, who stars as the wild and returns a payout of up to 10,000x, the Rocky slot game features Apollo Creed, Rocky’s adversary and eventual friend; Clubber Lang, who appeared in the third film and was played by Mr. T, and Ivan Drago, a fighter from the USSR. You’ll also see appearances from Adrian, who he marries in the second film, and Paulie, his brother-in-law.

Re-live one of Hollywood’s greatest ever sports franchises by taking a few spins on the Rocky slot game. If you have a Slots Heaven account, you don’t even need to wager real money, as all members are given access to a demo mode, where they can spin for free.

Once you’re ready to up the ante and play Rocky for real money, just make sure you have some funds in your Slots Heaven account and you’re good to go. You can deposit using a variety of safe and secure methods and when you’ve finished here you can take your real money balance over to other sport-themed slot games like Ronnie O’Sullivan’s Sporting Legends.

The biggest win on the Rocky slot game is triggered by the wild, which offers a payout of 10,000x per payline. If you land the wild symbols during the feature, the payouts get even bigger and can stretch as high as 20,000x due to the 2x multiplier.

In the Knockout Bonus feature, you’ll first be asked to choose from one of three Rocky opponents: Drago, Lang, and Creed. Rocky will then step into the ring for a 10-round contest and every time he wins a round, you’ll get a cash prize. If Rocky gets an early knockout, all of the remaining rounds will be settled in Rocky’s favor.

As always, Rocky will win the fight no matter what, it’s just about making sure he gets multiple successful rounds under his belt.

The other bonus to look out for is a free spins feature triggered by three of the “Italian Stallion” logos. You’ll get 10, 20, or 25 free games, depending on whether there are 3, 4, or 5 scatters, and additional Rocky symbols will be added to the reels. You can unlock extra spins during this feature and it’s also possible to trigger the Knockout Bonus.

Finally, if the standard “ROCKY” symbols appear from left to right and spell out the star’s name, you’ll get 5x the total bet.

It’s time for a hefty dose of 70s and 80s nostalgia with Rocky, an amped-up slot game that you can play on mobile devices. It is supported on iOS and Android platforms and works with most older devices, as well as all new ones.

Mobile is the best way to play this game as it provides a more immersive experience, dropping you into the heart of the action as you watch PA’s finest swing for glory during 10 gruelling rounds.

The Rocky film franchise told the story of an average man who became a global superstar through grit, determination, and the heart of a lion. He refused to follow the most basic of boxing fundamentals and chose to block his opponent’s punches with his face and not his gloves, but he always got the result and that has earned him the eternal respect of sports fans everywhere!

Revisit this film today by taking a few spins on the Rocky slot game. Just add funds to your account, and play on your platform of choice.