Did you ever wonder what it would be like to be one of those all-powerful emperors from the ancient civilizations? To wield such great power, to rule over the entire known world, to dictate the very actions and movements of so many people; the mere thought of it is both magnificent and terrifying at the same time! Well, now you can walk a mile in those tremendous sandals without the stress or responsibility of the actual position when you play Rome & Glory, an entertaining online slots machine featuring at our online casino today! Come and play the part. 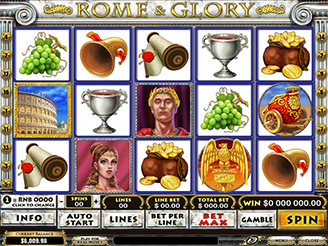 The reels of Rome & Glory are all clean and crisp, brightly lit up and standing bold and clear under an open blue sky, just what you would expect an emperor’s folly to be like. The images entertain exactly that fantasy with large brass horns of plenty, luscious green grapes, silver goblets, coffers of gold and important messages on parchment scrolls. There are also gilded items that you couldn’t imagine an empirical spread without. Of course, there is the proud and strong emperor figure himself, along with the quiet beauty of his affection. These are the two most valuable icons in Rome & Glory in terms of payouts. The emperor scores you five thousand times your wager when you get five of them, while the lady friend gives two thousand for the same five.

Then the Coliseum shows up to complete this happy scene at Slots Heaven. The Coliseum, the grand and impressive structure, has several roles for this version. It is the scatter symbol, and that means it works differently than all the rest of the icons on the reels. Instead of being tied to a specific pattern or reel sequence, the scatter symbol can pretty much go and come as it pleases without affecting its value. Now three of these symbols create a wonderful bonus feature to appear. A separate screen will appear in the form of a throne room. Here, one of the images will appear at the center of the screen. It is there to indicate to you that this will be your mystery scatter symbol during the free spins that you’ve just earned. That’s right, three or more regular scatter symbols deliver ten freebies just for you!

Want to see what other Slots Heaven casino games online you might enjoy today? Then head over to the lobby, and peruse our wide selection of gambling treats now!