The Winners Club Scratch card game is a classic scratch game and yet it is different to most of the scratch cards that are found online at Slots Heaven casino. Players will see scratch cards that look a lot closer to the kind of scratch games that are found offline, rather than the regular casino games that players are now used to. The game has been designed in such as way that it gives the player the feel playing this game offline. Of course, even though the game may look the same as the old land based scratch games, they come with the advantage of being online casino games, which means that the odds of winning are higher than if they were played offline. 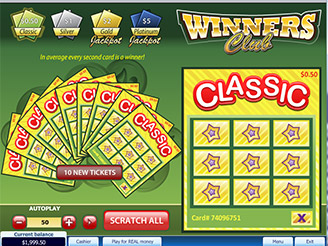 To begin with, players will first need to choose a card. Yes, there are 10 cards that are fanned out on the left hand side of the game, and the player gets to pick one. Players first need to choose a level that they wish to play. This is not choosing a wagering level as in other scratch casino games, but rather choosing from one of four levels, each with its own set wagering amount. The four levels to choose from are Classic, Silver, Gold, and Platinum cards. After picking a card to play in the Winners Club Scratch game, players will then begin regular game play. It is even possible to use the Auto Play option when playing the Winners Club Scratch game at Slots Heaven. The random number generator software will simply choose the cards randomly for the player and then continue Auto Play as it would with other scratch cards.

In order to win when playing the Winners Club Scratch game, players will simply need to scratch off the panels. There are nine squares that are set out on a 3 x 3 grid, and player need to get three matching numbers to win. Players will need to scratch off the scratch cards’ panels in order to reveal the numbers that are hidden underneath. It is possible, as with other similar casino games, to scratch off one panel at a time, or to choose the scratch all option that is available. Players at Slots Heaven who find three matching numbers have won the card, and will receive the payout depending on which game they chose to play.