The Batman & Catwoman Cash slot is based on the classic Batman TV series from the 1960s. It featured Adam West in the titular role, as well as Julie Newmar as Catwoman and Burt Ward as Robin. It was a wonderfully camp show that still holds up today, even though Batman has been taken down a darker and grittier path.

Batman & Catwoman Cash is a Playtech slot, and it features the classic DC Super Heroes Jackpot tier, as well all the color, style, and glorious gaming mechanics that you’d expect from a Playtech title. 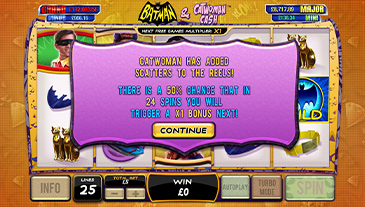 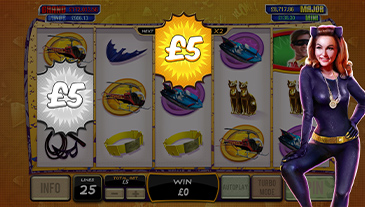 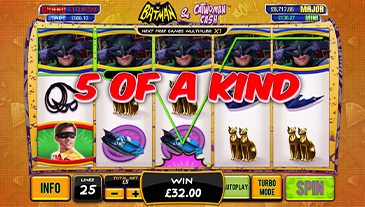 Three iconic Batman characters make an appearance in this slot, including The Dark Knight, Boy Wonder, and Catwoman. The Bat Symbol Wild is the symbol that rewards the biggest payouts and this is closely followed by Batman himself, with Catwoman and Robin close behind.

Most symbols pay when at least 3 appear consecutively, but Batman and the wild trigger payouts for just 2 matching symbols.

Immerse yourself in the world of the Dark Knight without risking any real cash! Our Practice Mode is open to all Slotsheaven.com CA members—you don’t even need to have funds in your account. It’s the perfect way to introduce yourself to a slot and its features, allowing you to familiarize yourself with the game.

Once you know what you’re doing, you’re ready to make a real money switch.

Firstly, make sure you have a Slotsheaven.com CA account. If you’re not a member yet, check out our latest Welcome Package, take a peek at the terms, and then sign up. Once your account is active, you’re just one deposit away from collecting your bonus and taking a spin on this Playtech slot.

If your account is fully funded, simply click the image on this page, load the slot, and start playing! Remember to gamble responsibly and only wager an amount that you can afford to lose.

The DC Super Heroes Jackpot is one of Playtech’s biggest and it connects across multiple superhero slot games, including Batman & Catwoman Cash. There are four jackpots in total, each larger than the next:

Any of these 4 can be claimed via the jackpot game, which is activated at random during any spin, regardless of the wager or whether the spin is a winning one. As the jackpots are progressive, they are constantly changing and climbing with every spin across every connected game. You can see the current totals above the reels.

When the free games are over, all Diamond symbols are swapped for scatters, increasing the chance of triggering yet another feature. Diamond symbols also play a big role in the Cat Burglar Bonus, appearing more frequently and awarding cash prizes.

As good as Batman & Catwoman Cash looks on desktop, it looks even better on mobile. The smaller screens make the 3D graphics pop, creating a fun, flamboyant little slot that you can take anywhere you go.

All slot games at Slotsheaven.com CA are supported on mobile, and you can play on most tablets, phablets, and smartphones regardless of whether they use the Android or iOS operating system.

If you enjoy this game and want to join Batman on more of his colourful adventures, check out the Batman & Mr. Freeze Fortune slot or Batman & the Penguin Prize. Both games follow the same format and there are many more to discover, as well.

Whether you’re a fan of the original 1960s series or just love colourful and feature-rich slot games, Batman & Catwoman Cash is perfect! It’s a gloriously colourful and eccentric game that comes with four progressive jackpots, two big features, and lots of chances to win. You can play it on mobile or desktop and once you’ve finished here, there are many similar slots for you to explore.

Take a spin today and experience this great slot for yourself. If you’re new, be sure to drop by our promotions page and see what bonuses are waiting for you.