The Gladiator film was a smash hit film that launched to great critical praise in 2000. The Ridley Scott masterpiece became the second-highest-grossing film of the year and also won 5 Academy Awards. Most of the film’s plot is fiction, but it is rooted in historical accuracy and immerses players in a world of deceit, warfare, and brutality.

Gladiator Jackpot captures the beauty and epic scale of this film. It’s a progressive jackpot title that gives players a chance to win big every time they take a spin, and it has a couple of interesting features to look out for as well. 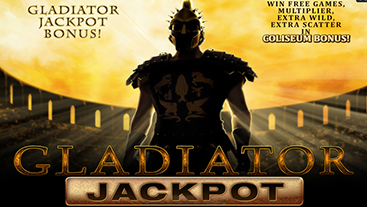 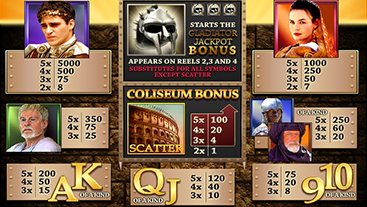 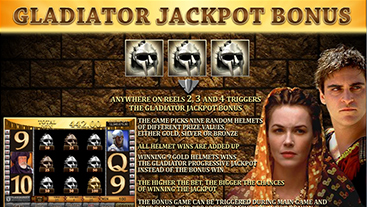 Gladiator Jackpot features many characters from the film, including a very young Joaquin Phoenix as Commodus and Oliver Reed as Proximo. Gladiator was actually Reed’s final performance. He passed away during filming and his final scenes were filmed using CGI and a body double.

Gladiator was a truly spectacular film and Gladiator Jackpot aims to emulate its scale, beauty, and uniqueness.

If you are a big fan of Ridley Scott’s Gladiator, then you’ll love Gladiator Jackpot, and you don’t even need to wager real money to play. Most Slots Heaven CA games are available in demo mode, which allows you to sample the features, payouts, and paylines without making a real money wager.

The progressive jackpot is one of the biggest draws of the Gladiator Jackpot slot game, and if you want to be in with a chance of winning this sizeable sum, you need to play for real money. To spin for the jackpot, just visit the Cashier, use one of the many secure payment methods, and return to this page.

Gladiator Jackpot has two features to look out for and these are triggered by the Helmet Bonus symbol and the Coliseum Scatter symbol. The former appears on reels 2, 3, and 4, and you need all 3 for the bonus to activate.

As noted above, the Helmet Bonus feature rewards you with cash prizes and if you collect all 9 Golden Helmets, you’ll scoop the progressive jackpot.

The Coliseum Bonus begins with a game of choice. There are four rows with stones, and you have to select the stones to reveal the prizes:

For each pick that you make, one of four things can happen:

The feature can’t be re-triggered, but if Commodus appears on the third reel then 3 Extra Spins will be added to the total.

The Gladiator film feels like a lifetime ago now, but the Gladiator Jackpot slot game is much more recent and has been adapted to ensure it works perfectly on mobile devices. Everything you can find on desktop versions is also available on mobile, including the free spins, the bonus game, and the progressive jackpot.

Tap the “Plus” and “Minus” icons to change the total paylines and stake; select “Autoplay” to spin automatically, and tap “Info” if you need information about the specific direction of paylines.

With a massive progressive jackpot, some nostalgic symbols, and a couple of standout features, the Gladiator Jackpot slot game has a lot to offer. Once you’ve finished your adventure with Maximus Decimus Meridius, you can step into the shoes of other famous warriors in Gladiator: Road to Rome, which is also available at Slots Heaven CA.

There are many more where these came from, with an abundance of top titles exploring the worlds of ancient Greece, Rome, and Egypt; games from fairy tales and fantasy, and even titles that take you into the cosmos!